The apliqo C3 Core FIN model now also supports top-down planning with inputs controlled centrally by a few (or even just one) users. Central to the C3 planning concept the top-down plan is driver based so all results are traceable back to selected business drivers. In the case of top-down planning the selected forecast method and phasing drivers cascade down the approval hierarchy of each dimension such that if desired only one driver selection is needed per planning account which will be spread down to the base planning level of each business segment dimension. Functionality is also provided at any level of a business segment approval hierarchy to override the driver entered higher up to allow for fine control of the top-down plan.

This design allows a top-down plan to be prepared very quickly with minimal effort and the plan is guaranteed to reconcile and have traceable drivers at the lowest level of the planning dimensions.

The main technical point of difference for top-down entry is that the drivers are entered in the cube }APQ C3 FIN Planning Driver Control which handles the inheritance of the drivers and all resulting drivers at leaf level are pulled through into the planning cubes via rule where the normal calculations take place using logic consistent with the working budget version. The }APQ C3 FIN Planning Driver Control cube can also be used for any other version to set up "seeding" of drivers as part of setting up a new plan. There is also functionality to copy drivers at leaf level from top-down to working budget as part of the budget planning initialization. This ensures that the starting point of the bottom up working budget submission is 100% identical to the top-down plan and not only variance between top-down plan and the final budget can be tracked at any level of the organization but also traced back to differences in selected business drivers and phasing.

Budgets are forecasts, and any forecast by definition is wrong. It is just a matter of by how much. To some organizations a budget is just a number whereas others, especially public listed entities, live and die by the budget and the variance  of actual performance to the plan. Regardless of the relative importance of the budget for many companies an in-year re-estimation of the plan to try and get as close as possible to the "year-end landing-point" is an important financial process, especially for companies reporting to the market.

Depending on need and an organization's established financial processes the in-year re-forecast could be on a monthly, quarterly or ad hoc as needed cycle. Regardless of the timing and regularity, the apliqo C3 Core FIN model supports in-year re-planning via the "working forecast" version. In the working forecast version all prior months which have actuals equal the actual result and all future months are open to be re-forecast. The driver logic of working forecast is essentially similar to working budget except for some additional drivers (e.g. "as per budget" or "as per previous forecast").

At the conclusion of a re-forecast cycle the working forecast is copied to a hardcoded "snapshot" version to be preserved for future analysis & reporting. The C3 FIN model comes with 12 placeholder monthly re-forecast snapshots, but an unlimited number of snapshot versions can be created.

2 new "lookup versions" were introduced to assist with planning. Especially in the context of the month-by-month phasing model popup due to the year offset (e.g. when planning budget it is for Y+1)

This release sees the introduction of built-in security groups for managing access to C3 Core FIN and custom TM1 objects. The group names can be customized by editing the }APQ C3 Security Groups dimension and security access is set for all object types in the }APQ C3 Security Access cube and pushed to the TM1 object security model via a TI process }APQ.C3.Security.Objects.Update.LoadAccessRights

This release also introduces a standard approach to managing element security for the Version, Company and BSEG dimensions. As with object security the built-in security groups can be customized by editing the }APQ C3 Security Groups dimension. Each dimension which could have element security applied has a pre-built maintenance cube where settings are applied. An example is shown below for the FIN Version dimension. 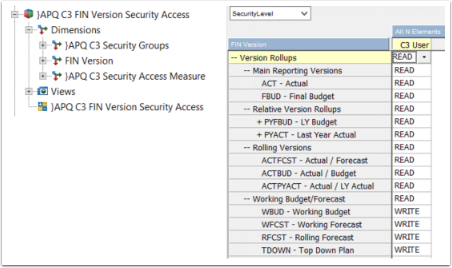 Element security for FIN Version is mandatory as only the working versions are writeable. For Company and BSEGs element security is optional but the pattern and method of application is identical as per the Version dimension. The control cube name always }APQ C3 <dimension name> Security Access. The existence of theses cubes does not imply that element security is necessary only that it is possible and can be switched on seamlessly. Whether element security should be applied is set in the }APQ C3 FIN BSEG Control cube. 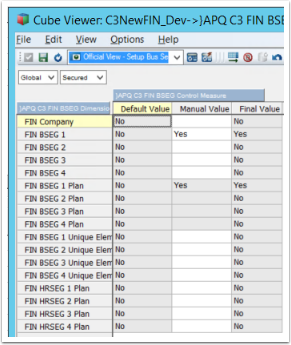 Running the process }APQ.C3.Security.Elements.Setup will create element security cubes for all dimensions marked with a "Yes" for secured. Running the process }APQ.C3.Security.Elements.Update.LoadAccessRights will transfer all security rights from each  }APQ C3 <dimension name> Security Access cube to the element security model. Operational and Planning dimensions are always handled as a linked pair. Where the dimension is not secured the security access cube is ignored.

The same template can be used to secure other dimensions. All that is required is to follow the same cube design and naming convention for the security access cube and the same }APQ.C3.Security.Elements.Update.LoadAccessRights process could be used to set element security for any dimension.

2.3. Integration of security with workflow status

The 2.02 Core FIN module release introduces a TM1 cell security layer to each Planning and Driver cube, including expense sub-modules. The cell security is linked to the status in the  workflow cube FIN Planning Workflow. Based on the nominated dimension and approval hierarchy for the planning cube the READ/WRITE access switches dynamically based on entry to the workflow cube.

The workflow has the following sequential statuses:

The workflow applies to the following plan types:

This allows for difference in accommodation, meals, entertainment, ground travel and daily per diem to bne entered on a per company per month basis.

Additionally travel routes can be individually planned with differential cost per company and per route.

For cost center managers forecasting T&E expenses  becomes a simple matter of entering the number of trips per destination/route per month. Each T&E line item is mapped to a chart of account (which could be cumulative, that is the T&E plan may be more granular than the chart of account.)

Marketing expenses are another case where specialized modeling may be required (but generally standard across companies and industries). The FIN Expense Marketing Planning cube allows for segmentation of marketing expenses by activity type (e.g. Print, TV, Outdoor, Radio, PR, Digital, Events, Promotions, etc.) and by campaigns. Each campaign can then be planned via budgeted amount, start date, end date & phasing.

This allows for detailed granular planning with the ability to "slice and dice" the plan by activity/campaign/vendor/agency etc. to compare to actuals and analyze the effectiveness of spend. Like Workforce planning and Travel & Entertainment this sub-module plan may have a greater level of detail than available in the General Ledger.